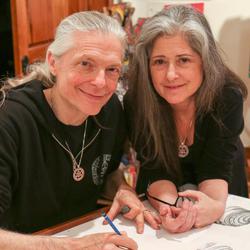 A special message from Alex and Allyson Grey on World Psychedelics Day!

The mystic paintings of Alex Grey articulate realms of psychedelic visionary consciousness,revealing interwoven energies of body and soul, love and spirit, illuminating the anatomical core of each being.Alex’s visual meditations on the nature of life and consciousness, the subject of his art, have reached millions through his five books including three monographs, the exhibition and extensive reproduction of his artwork, speaking appearances including a popular TED talk, stage sets for major rock bands,video animation,and Grammy award winning album art.

Together,the Grey’s co-founded the Chapel of Sacred Mirrors, CoSM, a spiritual creative retreat center outside of New York City. On the forefront ofa movement in which painters join musicians on stage,the Grey’s have painted together live before tens of thousands of dancing young people atNew YorkBroadwaytheaters, at sold-out festivals and arenas in dozens of international cities across fivecontinents. As long-time advocates of “cognitive liberty,” a growing international “sacramental culture” hasembraced the Grey’s as important mapmakers and spokespersons for the visionary realm. The Grey’s, with the CoSM team, are currently buildingEntheon, a Visionary Art sanctuary at CoSM. cosm.org

You need to register to perform this action. Simply enter your email into the box below.